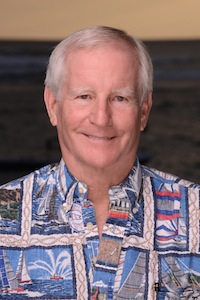 Mark has lived in Hawaii since he was 2 years old. After attending the University as a Marketing Major he joined his family’s retail business where he was able to direct its growth from 3 stores on Oahu to 23 stores statewide. Upon the sale of the family business, Mark entered the commercial real estate field where he concentrated on both the leasing and sale of investment properties from 1986 until 2010, when he decided to dedicate more time to residential sales.

Having supervised the building of over 20 stores and developed both spec homes and 3 personal residences in Hawaii, Mark has a strong background in the building and development arena. In addition, he has served as a Director on various corporate and non-profit Boards, most prominently for the Outrigger Canoe Club, where he was also President.

During this time Mark was also very involved in water sports, competing and coaching winning outrigger paddling crews. He lives the "Hawaii Life" and, while enjoying the ocean, has racked up over 35 Molokai-to-Oahu crossings and 15 victories in various categories (5 of which were overall!).

Listings in Neighborhoods Where Mark Has Developed Homes

Perched on a hillside in the exclusive enclave of 14 estate sized lots in gated Waialae Iki 5, is this beautiful villa sitting on over 3/4 of an acre. Spectacular ocean ...

As you turn onto Laamia street, you are transported to the idealistic community of lower Waialae Iki comprised of beautiful homes with even more stunning views. 1422 Laam...

Arguably one of the most architecturally modern designed home on Waialae Iki. Enjoy magnificent sweeping views of Waialae Golf Course, Ocean and Koko Head. Renovations a...

Vacant cleared lot in a quiet cul-de-sac within the exclusive gated community of Waialae Iki V. Sweeping views of Koko Head and the ocean. Here is your chance to build yo...

Beautifully renovated single level home with a brand-new deck, great for entertaining on a 10,000 sq ft flat lot located at the bottom of Waialae Iki. Enjoy the large sp...

Looking for a well kept multi-purpose property that has a great location in Aina Hina? This former care home features 5 bedrooms / 3 bathrooms downstairs with a wet bar ...

Located in one of Hawaii's premier gated communities, this rarely available panoramic view lot offers spectacular vistas from Koko Head to Diamond Head and beyond! Build ...

Great opportunity to make this Waialae Iki single level home your own! Walking distance to Waialae Iki park and just a short drive to the beaches, shopping, and dining in...

Courtesy of Caron B Realty

Listing courtesy of Caron B Realty.

Lovely family home that has been maintained through the years, and meticulously updated! Spic & span clean, lite & brite, this immaculate 3 bedroom home comes with large ...

Courtesy of One Realty, Incorporated

Listing courtesy of One Realty, Incorporated.

ALL OFFERS WELCOME! CONTRACTORS SPECIAL!!!! BELOW LAND VALUE!!! Bring your contractor, ideas and imagination. Don't miss this chance to live in this desirable neighborho...

I had a great experience working with Mark Buck... See More