Another Re Re Record Home Price on Oahu

Well, another re re record, re re re record price here on Oahu. I'm starting to sound like a broken record because we just hit another record for the median sales price for single family homes here on Oahu. This is David Buck with Harcourts Island Real Estate here to give you the monthly market report for June of 2021. Like I said, we hit a record, which was $979,000. That's an uptick of $1,000 from the previous month in May of $978,000. However it's also a 27.1% increase from June of 2020 when we were kind of in the middle of lockdowns here on Oahu. Back then we were at $770,000. So, to see a strong double digit increase in the median sales price is something we probably have not seen since 2007 I'm guessing off the top of my head.

We also had a robust increase in the numbers of sales, which were up 49.3% from a year ago. We had 451 homes that traded last month compared to just 302 the previous year. Median days on market were also down significantly. It's not like it was bad last year at 20 days, but we're now down to just 8 days.

Other significant data to report is months of remaining inventory, also a seller's market at 1.2 months. Whereas a year ago it was 2.5 months of remaining inventory. So that's down 52%. Also, a barometer we've talked about over the years is the number of homes on the market and last month we were just shy of 800 homes for sale at 796. And, that was a 32.5% decrease from last year of 1179 homes for sale. 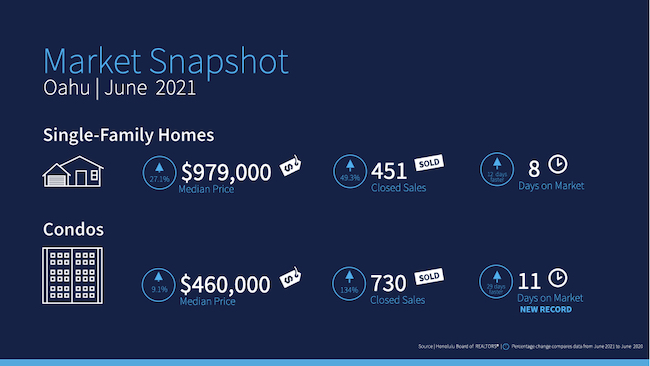 As far as the condo market goes, we saw an even larger increase (a significant increase) in volume and numbers of sales. We saw a 134% increase from a year ago where we had 312 sales and now we're at 730! So, the condo market is fully rebounded and we almost hit a high there as well! We finished off the month at $460,000 for the median sales price and that's just $1,000 shy of the record we hit back in 2019. Now the median sales price has surpassed COVID numbers and surpassed the previous record as far as condos go. And, that's a 9% increase in median sales price from just a year ago at $421,500.

The median days on market are also really low at just 11 days. That's. 72.5% drop from  40 days on market a year ago. One thing to keep an eye on is new listings are creeping up from a year ago as are pending sales. So, inventory is starting to pick up a little bit as the word is getting out that things are trading at good numbers. Active listings, however even though we have those new listings coming online, the absorption is just too fast. So, active listings overall for the month were down 27% from a year ago.

Last, but not least we saw a jump in the average sales price, which is up 15.8% to finish at $557,000. Once again, it's summertime and the market is firing on all cylinders. If you'd like to learn more about how we can help, I've got our Core Values here in the background for Harcourts, which is People First, Doing the Right Thing, Being Courageous and once again having a little bit of Fun and Laughter. Mahalo.