The Park at Ward Village

Behind me is their first tower, which was Waiea, which was completed in 2016. It's a luxury condo with some town houses in the front and this is on the corner of Auahi and Ala Moana Blvd.

Released shortly thereafter was Anaha. It's well known for its infinity pool up above. It's actually getting some work done on it at the moment, but it has a lot of high end amenities, and built and launched shortly after Waiea.

After Waiea and Anaha came Ae'o, which you can see behind me. It's iconic because it's anchored by a 60,000 sq. ft. Whole Foods supermarket, which is one of the amenities of living here in Ward Village.

Across the street from Ae'o is Aalii. This is the latest tower that's just being completed. Those are AC compressors there on the balconies. This was a concept that was launched, where they had a lot of "micro units" and they've had a lot of success and they'll be closing out soon and you'll see a lot of people coming and going in the building here shortly.

For perspective on the same block, you have Ae'o, Aalii and across is Koula, which is going up on Auahi St. If you can imagine on the back side of Auahi is the park, which we'll talk about more later.

This will be some great perspective, we came from around the block from Aalii, which is just being completed behind me and out the back, which we haven't talked about yet directly behind me is Ke Kilohana. That was Ward Village's first affordable project for reserve housing. Then (turning around again) directly behind me is Koula, which is going to be on the park here.

If you can visualize it, this park is going to go all the way across the street and on the corner out to the side there, that's Victoria Place, which is the only tower that Howard Hughes is developing without any retail. It's very exclusive. There's actually only a few units left there, which are 1 bedrooms, so contact me if you'd like more information on what is available there.

The Park at Ward Village

If you can imagine where the old Sports Authority was, directly behind me that's what's going to be called The Park at Ward Village. 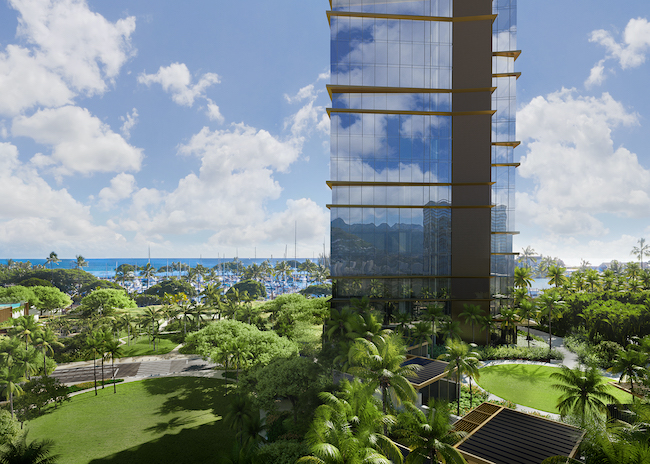 If you have more questions about The Park at Ward Village or any other Howard Hughes properties here, feel free to reach out. I can be reached at 808-371-3509. Mahalo!